Everyone is in election mode. On the right, they are explaining how not losing too many seats was a win of sorts. On the left, they are celebrating how they won back one of the houses of congress and can finally check the conservatives. 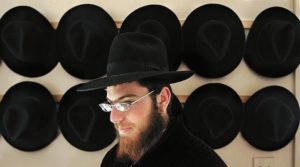 In the center… well there doesn’t seem to be much of a center.

One thing is clear, that the blue wave, or the red wave, didn’t happen. So, while some people won certain battles, the war, the war for a country united was lost. Not much of a surprise to our sadly polarized country.

I am starting a new movement, I am going to call it the Black Hat Wave. More on this in moment.

Tuesday night, election night, we had a full house at our Chabad Center, literally bursting at the seams, it was a crowd, hungry, starving in fact, for some solace, and guidance, from a Holocaust survivor. A Jewish people broken yet again by the massacre in Pittsburgh, jittery and insecure, turned out in massive numbers to what we thought would be a perfect response to Pittsburgh.

Firstly, showing that we are not afraid, and we will show up to a Temple without fear. Secondly, to hear from a Survivor, someone who had witnessed and experienced the worst horrors known to humanity, to give guidance as to what we ought to be doing in reaction to these horrors.

We had figured what could be more uniting, than rallying behind a survivor and her story. What could be less polarizing and something everyone could get behind, hearing about the Shoah from someone who was there, and some suggestions about what we ought to do to go forward. Indeed, the attendance in the room bore out this sentiment. A full house as we had not seen since Yom Kippur.

Yet, even in her talk, our dear guest speaker was filled with political lingo, clearly leaning to one political direction. Now, I don’t deny her right to have a political opinion, I have one myself. I had just assumed that she didn’t need coaching to stay on message and not go political as the call of the hour was to unite our people. In fact I told her before the talk, that if you lean on one direction politically, you will alienate half the crowd, and their minds will turn off. Regardless of which direction that is.

She chose not to listen to my suggestion, and well, exactly as I expected. Some loved her others didn’t. Ultimately, I think she squandered a somewhat a perfect opportunity. She undercut her own message of unity. She did have a message about standing up in the face of anti-semitism and not staying silent. However, that message for many (that contacted me afterwards) got lost in the political jabs inserted in her talk.

To be clear. She is the sweetest, kindest, nicest, warmest and beautiful 92 year olds I have ever met. She was poised, confident and commanded respect, all 5’1” inches of her. So this is in no way an attack on her.

Rather, to me it highlighted the intense division in this country, so much so that something that I had assumed to be the most “parve” of topics, (in the sense of being not able to be politicized) was influenced by the division of modern day politics. And it struck me, is there nothing that is devoid of politics? Are there no sacred spaces?

Is there any hope? What can we do?

I introduce, the Black Hat Wave.

At my table at the farewell banquet, was a friend from Boise, Idaho, and rabbi’s from Paris, Georgia (the Country, not the state) and beyond. What unites us all? How did we communicate when there were at least 5 languages just at my table of 12?

The secret is the black hat that we all wore. I’m kidding, but only kind of. The black hat is part of the Chabad chassidic uniform, but it an external marking of a Lubavitcher. What unites us is the common theme and life message and mission, which is common to all of us under our black hats.

That is, the Rebbe of Righteous memory’s dream to transform the world to a place of radical love and acceptance. When asked about Conservative Jews or Reform Jews, the Rebbe replied, that he didn’t like labels as they only serve to divide.

When people came to the Rebbe for guidance or blessings, the Rebbe didn’t ask them if they were Jewish or not, or if they were conservative or liberal, dark skinned or light. In fact the Rebbe didn’t require any thing. He did often – even always – requested that people do what they can to increase goodness and light in this world. For each person that meant something else, but the Rebbe’s one common goal that all of us 5000 black hatters in the room know and make our life’s mission, is to love, and not judge any other human being. We can have deep differences, but that does not have affect how I feel about them.

There are many differences between us all, but focusing on that doesn’t do anything good. Focusing on our commonalities, well that can only bring to more collusion. The good kind. Uniting together to get more good things done. Ideologically we may not be on the same page, how could we be, we are different people?

However, we are all created in the image of Gd. Meaning, there is a transcendent, unifying factor that exists in all of us. That’s your Black Hat.

In this incredible time of extreme division and polarization I call for a Black Hat wave. A wave, where that message of radical love is so extreme, it doesn’t distinguish between peoples, and parties. That radical love is your black hat

Think about it, how many family gatherings, Thanksgiving dinners, even Temple services been ruined by a spat about some (political) division or another? And really, how often have you actually succeeded in convincing others to see it your way? I bet the answer is never! The fact is, there is a lot that divides us, but there is so much more that unites us. That is the Black Hat.

The Black Hat wave. Please, let that be the wave that sweeps this country. That is my party. That is what I am voting for. I hope you will join me.

(Ps. Do you know how many different types of black hats there are? The same amount as different Jewish opinions.)